The Science of Ageing – Global Progress 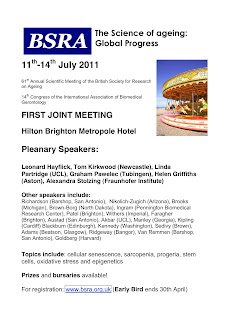 Prof Richard Faragher on the science of ageing

Taken from the Science Network: http://thesciencenetwork.org/
Posted by Unknown at 10:12 PM No comments:


When cells become senescent, they often display a senescence-associated secretory phenotype or SASP, which consists of cytokines, growth factors and proteases (Coppé et al, 2008). The SASP appears to be similar to a wound healing response and so may function in senescent cell removal. However, if senescent cells persist in tissues (possibly due to an impairment in the removal process) then the local tissue is constantly exposed to the SASP. The secretion of these senescence-associated factors has the potential to detrimentally alter the local microenvironment, leading to tissue dysfunction associated with ageing and disease.

In addition to the SASP there also appears to be a cell-type (or even cell-strain) exclusive senescent phenotype or CESP, an area of research underexplored. Microarray data of senescent cells show a differential expression of genes unrelated to SASP, which is nevertheless cell-type/strain specific (Shelton et al, 1999, Zhang et al, 2003, Burton et al 2009b, unpublished data). These transcriptional changes likely do not perform a specific physiological function (unlike the potential wound healing response of the SASP) and may be caused by random changes associated with alterations to the chromatin structure during senescence (Zhang et al, 2003, Funayama and Ishikawa, 2007). However, these altered transcriptional profiles may manifest into changes associated with altered morphology, behaviour and function and such changes could have a detrimental impact on tissue. Additionally, components of the SASP may directly influence changes associated with a CESP by activating pathways through autocrine/paracrine signaling. Different cell-types may respond differently to the SASP and this may lead to a CESP.

Examples of CESP are currently limited because the majority of work involving senescence has been carried out on fibroblasts with less emphasis on cell-types linked to disease development.

One example of a CESP is the decrease in nitric oxide synthase (NOS) activity observed in senescent vascular endothelial cells (Matsushita et al. 2001, Minamino et al. 2002). The synthesis of nitric oxide (NO) by NOS in vascular endothelial cells is important for maintaining vascular homeostasis and a decrease in NO has been suggested to be a potential risk factor in cardiovascular disease (Cannon, 1998).

Another example of a CESP is the insufficient insulin release observed in senescent pancreatic beta cells (Sone and Kagawa, 2005). Due to the importance of insulin release in regulating glucose metabolism, an impairment in this function is associated with the pathogenesis of type II diabetes.

A CESP associated with senescent vascular smooth muscle cells (VSMCs) appears to be the shift to a pro-calcificatory/osteoblastic phenotype (Burton et al, 2009, Nakano-Kurimoto et al, 2009). VSMCs play an important role in the contraction and relaxation of blood vessels, a mechanism that is responsible for the redistribution of the blood within the body to areas where it is needed. The pro-calcificatory phenotype of senescent VSMCs could thus impair this function and this could contribute to cardiovascular dysfunction.

To further understand the mechanisms associated with age-related tissue dysfunction and disease development, research should focus not just on the impact of the SASP but also the CESP.