A negative consequence of promiscuous gene expression in senescent cells is impairment in cellular function, the inability of cells to carry out their designated normal processes. As a result, the accumulation of these dysfunctional cells most likely leads to tissue dysfunction which compromises tissue structure and function, promoting disease. For example, a study using Klotho-deficient mice, which exhibit an accelerated ageing-like phenotype, investigated whether preventing cell senescence improves health-span in these mice. Plasminogen activator inhibitor-1 (PAI-1) is elevated in Klotho- deficient mice and is a known regulator of cell senescence. Klotho-deficient mice deficient in PAI-1 was reported to delay the induction of cell senescence, extending median lifespan and preserving organ structure and function. Another example of senescent cells that can no longer undertake their normal function might include senescent pancreatic beta cells that have impaired insulin release during diabetes and senescent vascular endothelial cells that display decreased activity of nitric oxide synthase (NOS). NOS is important for the production of nitric oxide (NO) required for maintaining vascular homeostasis and a decrease in NO production is associated with increased risk of cardiovascular disease. Therefore, a better understanding of the differences in the phenotype of senescent cells of different cell-types in relation to their in vivo function, is required to better understand mechanisms of disease development.

Physiological and pathological consequences of cellular senescence
Posted by Unknown at 3:25 PM No comments:

In addition to providing a protective role in tumour suppression and tissue damage, senescent cells may also function in embryonic development. It was suggested that cell- cell fusion induced senescence might play a physiological function in the placenta, thereby aiding embryonic development. ERVWE1, a fusion protein involved in the formation of the syncytiotrophoblast of the placenta causes cell fusion and induction of cell senescence in both cancer cells and normal fibroblasts. Fusion induced senescence (FIS) in vitro and in vivo is accompanied by activation of a DDR, p53 and p16(INK4a) dependent pathways. ERVWE1 mediated physiological cell fusion during embryonic development forms the syncytiotrophoblast that serves as the maternal/fetal interface at the placenta. The question of why the senescence program may be useful in normal placental function remains to be answered. However, it can be suggested that the resistance of senescent cells to apoptosis is necessary to maintain the viability of the syncytiotrophoblast. In addition, secretion of proteases, that are normally associated with senescent cells, may function to maintain feto-placental homeostasis. Placental proteases are required for the metabolism of vasoactive and immunomodulating peptides, thereby controlling the exchange of peptide hormones across the placenta and metabolic breakdown of maternal nutrients. Cytokine production is another feature of senescent cells that may play important roles within the placenta. IL-8, one of the main cytokines secreted by senescent cells, is necessary for normal placental function . Cytokine secretion may help regulate placental growth during pregnancy in addition to protecting the foetus from pathological organisms and facilitating interaction with immune cells. Further research is necessary in order to understand the functional significance of the senescence program in the placenta.

Physiological and pathological consequences of cellular senescence
Posted by Unknown at 2:46 PM No comments: 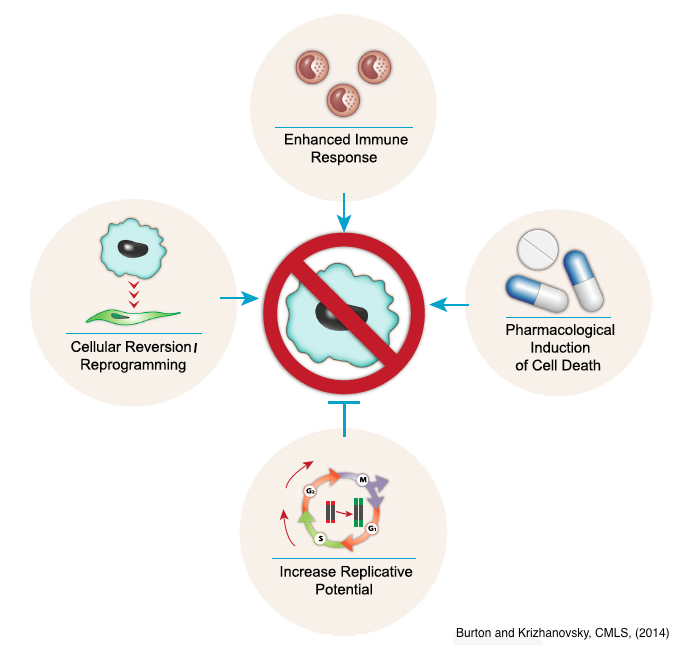 Link: Physiological and pathological consequences of cellular senescence
Posted by Unknown at 2:22 PM No comments:

The presence of DNA damage and subsequent up-regulation of p16(INK4a) in quiescent cells in vivo may induce a pre-senescent state that converts to a full senescent state when cells are stimulated to proliferate. This suggests that DNA replication is required to induce a persistent DDR associated with cell senescence.   For example, damage to skeletal muscle in normal young mice causes the activation of quiescent satellite cells (adult stem cells), which proliferate and undergo myogenic differentiation required for muscle repair. However, a recent study has shown that in geriatric mice (28-32 months of age), satellite cell activation is impaired and satellite cells instead convert from a pre-senescent state (quiescent cells with high p16(INK4a) expression) to a full senescent state (including a DDR) when stimulated to proliferate in response to injury. As such, the induction of senescent satellite cells with age can impair satellite muscle regeneration. This study suggests that senescent cells may accumulate in late life due to a conversion from quiescence to senescence (termed geroconversion) in response to a requirement for cells to replicate over time to regenerate tissue. In this model, more and more quiescent cells are likely to accumulate DNA damage over the life-time of an organism and are therefore more likely to become senescent when induced to proliferate later in life. Therefore, if quiescent cells inflicted with DNA damage convert to senescence when stimulated to proliferate, then eliminating such damage may prevent this conversion.

Physiological and pathological consequences of cellular senescence
Posted by Unknown at 8:20 PM No comments:

Taken from: Physiological and Pathological Consequences of Cellular Senescence

A recent study has shown that senescent HSCs can be eliminated by another component of the innate immune system, the M1-like macrophages during liver damage and tumorigenesis in the liver. Secretory factors from senescent HSCs were shown to aid the elimination of these cells by macrophages. In contrast, cells that could not become senescent due to deletion of p53 and were not targeted by macrophages. Therefore, the innate immune system appears to be an initial early barrier that regulates the presence of senescent cells in physiological conditions such as in wound healing.