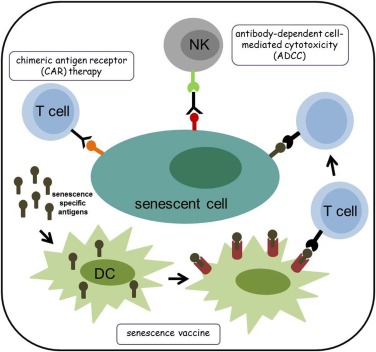 A recent study identified the expression of CD26/dipeptidyl peptidase 4 (DPP4) on the membrane surface of senescent fibroblasts which have undergone replicative senescence (Kim et al., 2017). This study assessed the potential use of DPP4 as a membrane target for promoting antibody-dependent cell-mediated cytotoxicity (ADCC) against senescent cells. ADCC is a natural mechanism of cell-mediated immune defence involving the activation NK cells by antibodies which has been adapted to promote NK cell-mediated ADCC in cancer immunotherapy (Wang et al., 2015). Kim et al. demonstrated that targeting DPP4 via an ADCC assay in vitro preferentially sensitised senescent, but not proliferating cells to cytotoxicity by NK cells. These finding highlight a potential immunotherapeutic strategy for targeting senescent cells.

As stated previously, one of the mechanisms by which NK cells specifically recognise and kill senescent cells is via the surface expression of NKG2D ligands (Sagiv et al., 2016). Since many tumour cells also express NKG2D ligands, such ligands have been suggested to be a useful target for immunotherapeutic approaches in cancer (Spear et al., 2013), and so could be adapted for senescent cell clearance. For example, the use of engineered immune cells such as chimeric antigen receptor (CAR) T cells to target specific molecules on cancer cells has great potential as an anti-cancer therapy (Yu et al., 2017). As such, it may be possible to target senescent cells by engineering T cells to express a NKG2D CAR which recognise NKG2D ligands on the surface of senescent cells.

An adaption of cancer vaccines could also be considered for boosting immune clearance of senescent cells. Although a universal biomarker of cell senescence has not been identified, the exposure of senescent cell membranes to immune cells may evoke an immune response to antigens not yet identified. In one approach, senescence vaccines would involve the isolation of senescence specific antigens (SSAs) which are then exposed to dendritic cells, professional antigen presenting cells. In response to SSA uptake, dendritic cells process and express these antigens on their cell surface which can then be recognised by T cells. T cell interaction with these antigens promotes T cell activation, differentiation and ultimately killing of target cells.

As discussed previously, the senescence program can also be activated in immune cells, which likely contributes towards impaired immune function, contributing to senescent cell accumulation. In addition to impaired immune cell function, the persistence of senescent immune cells would likely take up valuable immunological space required for expansion of functionally competent immune cells. T cells for example undergo rapid expansion in response to antigenic stimuli followed by cell-mediated apoptosis (Chou and Effros, 2013), a process that may be prevented if senescent T cells are present. As such, another strategy for promoting the elimination of non-immune senescent cells may be the removal of senescent immune cells with the anticipation that such an approach would enhance immune function.

The ability of immune cells to migrate and kill target cells can become compromised with age, suggesting that therapeutically boosting these responses may be beneficial for promoting senescent cell clearance. One approach that can be adapted within immune cells is the engineering of cells that recognise specific components of the senescent secretome. As proof of principle, Qudrat et al. generated cells with a chimeric IL-6 receptor (IL6Rchi) that generates a Ca2+ signal in response to IL-6, a component of the senescent secretome (Qudrat et al., 2017). When IL6Rchi was expressed with an engineered Ca2+-activated RhoA (CaRQ), it enabled directed migration to IL-6 in cells which normally have no such function. Furthermore, the expression of vesicular stomatitis virus glycoprotein G (VSVG) and herpes simplex virus type 1 thymidine kinase (TK) in these IL-6 seeking cells allowed cell-cell fusion to occur with target cells and consequently cell death upon administration of ganciclovir, an anti-viral drug."
Posted by Unknown at 3:13 PM

Older Post Home
Subscribe to: Post Comments (Atom)
The main focus of ageing research is to prevent/combat age-related disease and disability, allowing everyone to live healthier lives for longer.